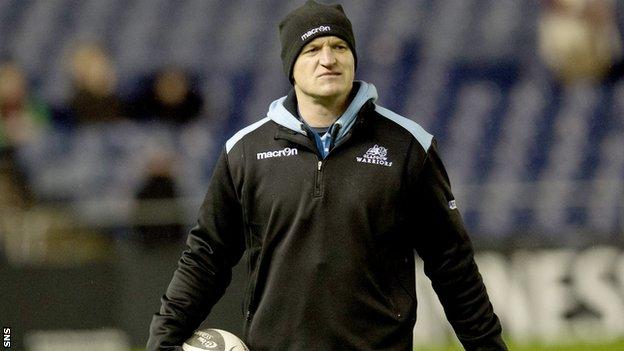 Glasgow head coach Gregor Townsend insists his side must adapt their game when Montpellier visit Scotstoun.

Warriors beat Scarlets 22-7 on Friday to maintain their 100% home record in the Pro12, and now turn their attention to the European Champions Cup match against Montpellier on Sunday.

"It was great to get a win but we know Montpellier will be a different game," Townsend told the Glasgow website.

"They play differently to Scarlets and will pose different threats."

And he added: "Not only was it great to get a win after the defeat to Edinburgh, I think that was the best we have played for a number of weeks.

"The first half was probably the best we have played since Bath."

If Townsend's charges win their last two games they can still qualify for the quarter-finals, and the head coach hopes Friday's display against Scarlets gives his side confidence.

"I thought with the conditions it would be lucky if any team scored a try, so for us to get three was very pleasing because we were playing a very good team and had to play well to beat them," he added.

"They had to play into the wind and rain in the first half and the guys were brilliant, even though we were two points down at half-time, we worked them really hard and showed what we can do."