Ulster fly-half Paddy Jackson is likely to miss Ireland's Six Nations campaign because of the dislocated elbow he sustained in the defeat by Toulon.

Jackson was forced off in the first half as Ulster were beaten 60-22 in the European Champions Cup game in France.

On Tuesday, Ulster reported that the 23-year-old needed surgery and would be out for 10-12 weeks.

Jackson had been hoping to force his way back into Joe Schmidt's squad after missing the autumn internationals.

With first choice Jonathan Sexton ruled out of Ireland's opening match against Italy on 7 February, Jackson would have been competing with Leinster's Ian Madigan and Ian Keatley of Munster for the number 10 shirt in Rome.

Racing Metro star Sexton is currently in the middle of a 12-week stand down period he has to serve after suffering four concussions in a year.

The medical ban is due to end on 14 February which is the date of Ireland's second Six Nations fixture at home to France.

Sexton would be more likely to make his comeback in the home match against England on 1 March.

Meanwhile, Ulster centre Stuart Olding also looks out of Six Nations contention as he too picked up an elbow injury against Toulon.

A scan confirmed the highly-rated 22-year-old had sustained significant ligament damage that would require surgery to repair. He is also expected to be out for between 10 and 12 weeks. 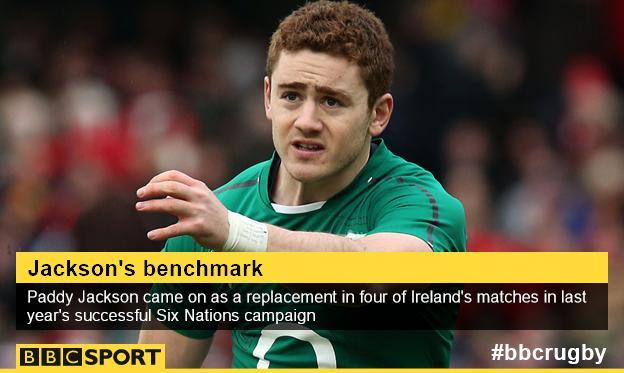