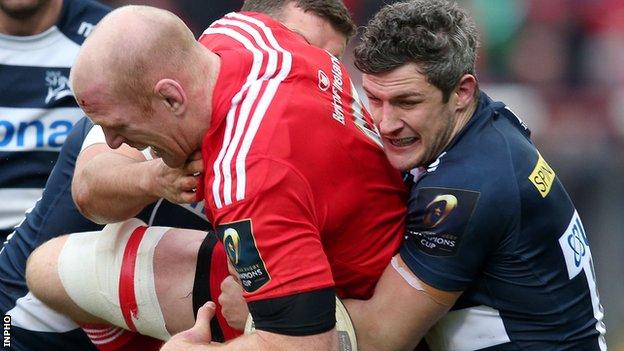 Munster ended their unsuccessful European Champions Cup campaign with an emphatic win over a tiring Sale side.

The Irish province, twice winners of the competition, were already out of quarter-final contention, but rounded off their Pool One series in style.

Eight of Munster's nine tries came in a second half during which the hosts notched 52 points without reply.

Simon Zebo and Andrew Conway each got two tries while Tom Arscott got Sale's touchdown in a competitive first half.

Munster ended with three wins from their six games, finishing third behind Clermont and Saracens who both made the last eight.

An early Zebo effort launched Munster towards a 10-0 lead, before the stubborn Sharks rallied with a tremendous Arscott score and the home side's advantage was a slender 13-10 at the interval.

However, after Earls crowned his first start of the season with an excellent individual try and a penalty try was added, the floodgates were well and truly opened as Pat Howard, Zebo, Andrew Conway (2), Tommy O'Donnell and Duncan Williams all touched down between the 65th and 80th minutes.

Zebo was on the scoresheet inside two minutes at Thomond Park, stepping inside Arscott and stretching over to score.

Keatley was keen to press his claims for the Ireland number 10 jersey, nailing a difficult first conversion from the right and quickly adding a penalty.

Nick Macleod duly got Sale off the mark, but obstruction at the restart saw Keatley immediately respond.

The Munster fly-half blotted his copybook, though, when allowing Arscott to fend him off near the left touchline as the Sale winger ran in a terrific solo try from outside the Munster 22. Macleod's conversion made it a three-point game.

The visitors made further inroads thanks to a series of sloppy Munster penalties.

Referee Marius Mitrea lost his patience when Conway killed the ball near his try-line and the wing was sin-binned.

Earls lit up the second half with a try in the opening minute, taking a great line to gather an Ivan Dineen offload, dashing clear over halfway and finding a way past covering full-back Luke McLean.

Munster then garnered a penalty try thanks to a dominant five-metre scrum.

The hosts' fourth try came when Keatley's inviting inside pass released South African Howard for a very well-taken score under the posts.

Zebo then completed his double with an opportunist try, cleverly rolling from the back of a close-in ruck to reach over and make it 39-10.

With Munster showing no mercy, replacement Dineen and Zebo combined to send Conway clear, flanker O'Donnell crashed over from close range and prop Stephen Archer provided the initial break and the scoring pass for Williams' touchdown.

There was still time for Zebo to break through the tired Sale defence and supply the assist for Conway's second try.