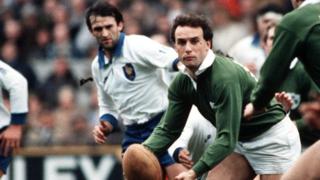 Ireland draw with France back in 1985

Michael Kiernan kicks all 15 of Ireland's points in the draw at home to France during their victorious 1985 Five Nations Championship campaign.

The Lansdowne Road encounter was the only match Mick Doyle's team failed to win as they regained the title they had last won three years earlier.

France scored the only two tries in Dublin on that early March afternoon, through winger Patrick Esteve and centre Didier Codorniou.