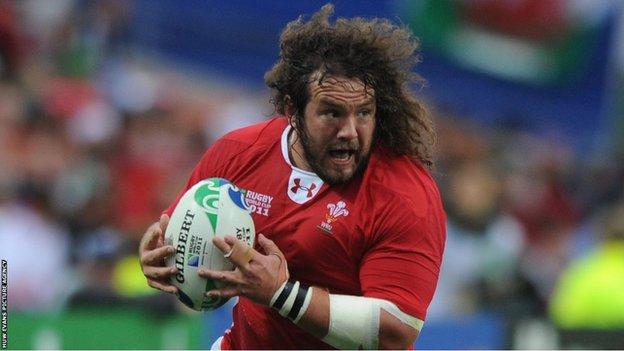 Wales coach Warren Gatland says he was surprised by the timing of prop Adam Jones' retirement from international rugby.

Jones, 33, announced his retirement after being left out of Wales' 2015 Six Nations squad.

Gatland says he would have "preferred" Jones to delay his decision until after the 2015 Rugby World Cup.

"I was as surprised as anyone when Adam made the decision to retire," said Gatland.

"I would have preferred it to have been perhaps after the World Cup because he wasn't out of contention in our minds in terms of the World Cup."

Tight-head Jones made 95 appearances for Wales, winning three Grand Slams, and played five Tests for the British and Irish Lions over two tours in 2009 and 2013.

The former Neath and Ospreys player's last appearance for Wales was the 38-16 defeat by South Africa in the first Test of their June 2014 tour.

His Test future was cast in doubt after he was replaced by Samson Lee after just 30 minutes of that game, having struggled in the scrum.

He was then left out of Wales' autumn 2014 series and was placed on standby for the Six Nations in case of injury.

Gatland at the time said that the door was open for Jones to force his way back into the squad for the World Cup, but the prop said that he made up his mind before Christmas that if he was not chosen for the squad he would retire.

Jones is set to continue playing for Cardiff Blues, who he joined on a one-year deal in August 2014 after his Ospreys contract expired.

Wales, meanwhile, kick off their Six Nations campaign at home against England on Friday, 6 February.

"As a coach you've got to make some hard calls sometimes and we've been very pleased with the progress in particularly Samson Lee over the last 12 months," explained Gatland.

"But sometimes you make that call when you're looking for some depth in certain positions.

"He's [Jones] made that decision to retire and we have to respect him for that."