Wales v England is always one for the ages, and the last time these two rivals met in Cardiff, Warren Gatland's fired-up Welsh side handed out a record defeat to Stuart Lancaster's men.

Friday's visitors gained a measure of revenge with victory at Twickenham in the 2014 Six Nations, but Wales have won three of the last four games and now trail by just one in the overall head-to-head record.

Wales great Jonathan Davies made his debut against England 30 years ago, and remembers running out at the old Arms Park into an "incredible" wall of noise - it is guaranteed to be ear-shattering in Cardiff once again on Friday.

Wales won 24-15 that day 30 years ago, but does the former fly-half expect a repeat performance this time round?

Everyone wants to get off to a good start in the Six Nations; there's tension and it's normally quite spicy.

Two years ago, when Wales secured that comprehensive 30-3 victory in Cardiff to win the Six Nations and deny England the Grand Slam, the roof was closed and the atmosphere and the occasion was immense.

The roof will be left open on Friday, despite Warren Gatland's preference for it to be shut, but the Millennium Stadium is a great sporting venue and there's always a great atmosphere there.

How will England handle playing in front of boisterous Wales fans? It comes down to mental toughness.

They have five players making their Six Nations debuts but they should know what to expect. The noise will be incredible, but each individual will react differently.

Sometimes, when the support is so vocal, it's very difficult to hear calls for things such as line-outs, and that's something you have to work on in training.

England have even gone down the route of arranging for hymns to be played over loudspeakers at their training base in Pennyhill Park.

Lancaster will want each of his players to puff out their chest and say, 'I'm going to show the world how good I am'. It's what sport is all about.

A lot has been written about England's injury crisis. They will be without a dozen players, with prop David Wilson, fly-half Owen Farrell, centres Brad Barritt and Kyle Eastmond, and four second rows among the absentees - but England's squad is still very strong.

They have a lot of strength in depth and that's what makes them dangerous.

Had he been fit, maybe Courtney Lawes would have come into the pack - and Steffon Armitage too, but he is unavailable as he plays in France - and Manu Tuilagi would have been one of the centres, but the players Lancaster has selected are in form.

Fly-half George Ford has been playing exceptionally well this season, as has Jonathan Joseph. On the wings, they have Jonny May and Anthony Watson who are also playing great rugby.

If England can get the ball and gain momentum, they have exciting runners to trouble Wales.

England will kick a lot

With Leigh Halfpenny and Dan Bigger, Wales are going into this game with two world-class kickers, which puts a lot of strain on Ford in his first Six Nations start.

That means there will be a lot of pressure on full-back Mike Brown and scrum-half Ben Youngs to help the Bath youngster execute England's kicking game well.

It will be interesting to see how the visitors play. Will they try to keep it tight with the forwards when they have the ball or will they let the backline go?

I think England will kick a lot because they know they can't get into a physical battle.

And by selecting Richard Wigglesworth, renowned as the best kicking scrum-half in England, on the bench, they have indicated the type of rugby they intend to play. 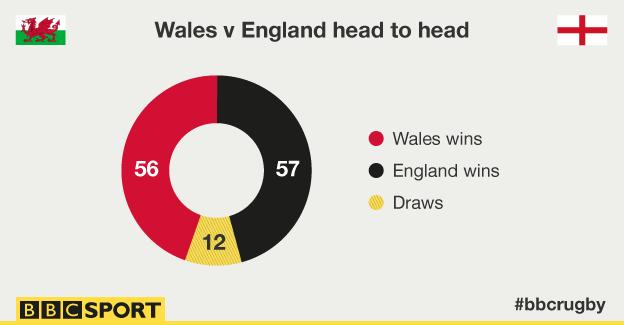 Wales will carry hard and be direct

Stuart Lancaster and his coaching team will know Wales' game-plan - they just have to figure out a way to stop them.

If running over the top of people works for the Welsh, they should keep at it, and if it doesn't, hopefully they'll have worked on other areas.

Gatland's side will have Jamie Roberts carrying hard in midfield and attacking the outside-half channel, while fly-half Biggar has really found his feet in international rugby.

The back row of Sam Warburton, Justin Tipuric and Taulupe Falatau - which has a combined total of 130 international caps compared with England's 97 - is balanced.

I'm sure England will try to ruffle Samson Lee in the front-row. The Scarlets tight-head, who only turned 22 last December, is Gatland's first-choice number three, and did exceptionally well during the autumn internationals, where he was Wales' stand-out player.

But he suffered a neck injury at the beginning of January and hasn't played for his region since.

The gainline will be very important and James Haskell will have to carry a lot from the back row for England.

Danny Cipriani will offer a lot if he comes on from the bench. I'm glad to see him back because the sometimes controversial Sale fly-half has amazing ability. He's knuckled down and is enjoying a very good season.

He attacks the line and if England are on the front-foot, opportunities might arise for him and Ford.

The match may well have a bearing on whether Cipriani fits in to the future of Lancaster's side. It's intriguing because we still don't know how England want to play long-term.

This will go down to the last 10 minutes

If you look at it in terms of experience, in terms of the number of caps - Wales' starting XV have 648 compared with England's total of 358 - you'd assume the Welsh have the edge. But England's players, particularly their backline, are in form.

Everyone's saying they are underdogs, but they've just got to out there and enjoy it, thrive on the atmosphere.

Everything will be magnified. There will be fewer opportunities than in club rugby, and less time. It will fly by and those players making their first Six Nations starts - Ford, Joseph, Anthony Watson, Dave Attwood and George Kruis - will have to adjust quickly.

It is going to be a tough Test, it's going to be very physical and there won't be a lot in it until maybe the final 10 minutes. It could go either way.

Gatland's Wales need to win this game because it might affect his men at the World Cup, when they will play England and Australia in the group stages.

But it'll be one hell of a contest and one hell of an atmosphere. It's going to be a lot closer than most people think because England's injuries have masked their strength.

Jonathan's prediction: Wales will win by three to nine points. They look to be the better side, they're an established outfit and have home advantage - England have won only one of their last six matches in Cardiff.