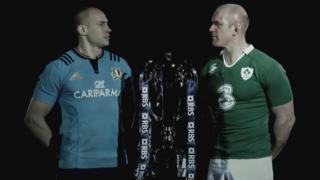 BBC Sport looks ahead to Ireland's opening match as defending Six Nations champions, as they take on Italy at the Stadio Olimpico.

Ireland start the tournament as marginal favourites to win back-to-back championships outright for the first time since the end of the 1940s.

Italy are ten time wooden spoon winners and the last time the Irish visited the Stadio Olimpico in 2013 they suffered a 22-15 defeat with three players sin binned.