The opening Six Nations weekend started with a thriller in the Cardiff cauldron and ended with signs that there is life in Scottish rugby despite another defeat in France.

There was a regulation win for Ireland in Rome, but the performance of the weekend undoubtedly came from England as they stunned Wales at the Millennium Stadium.

Moment of the weekend: England flanker James Haskell running into a post when it seemed easier to score. Fortunately, the padding did its job and the only bruising was to Haskell's pride.

Try of the round: Scotland replacement winger Dougie Fife finishing off a fine move in their loss to France in Paris.

Player of the weekend: England scrum-half Ben Youngs, who played his role to perfection in the 21-16 win over Wales in Cardiff.

England captain Chris Robshaw made 26 tackles and didn't miss one against Wales on Friday.

Robshaw, who also won two turnovers, was a man driven by the memory of what happened in Cardiff two years ago, when England suffered a record 30-3 defeat.

That kept his engine going. He was determined there was not going to be a repeat and he typified England's energy.

You have to be picked as a player before you can be considered as a captain - that is a secondary attachment. 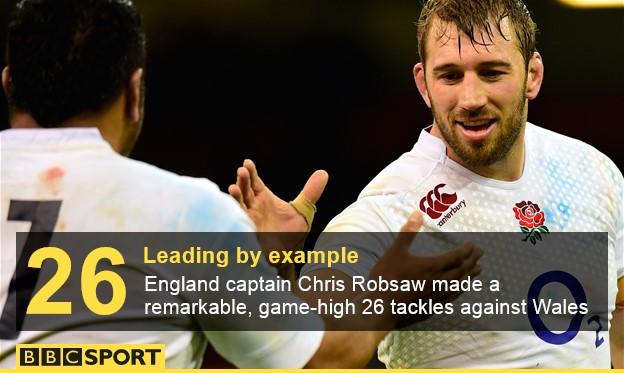 Stuart Lancaster picked Robshaw as his man right at the beginning of his reign and, despite the questions that arose with his decisions over the last-minute penalties against Australia and South Africa in the 2012 autumn internationals, he has not let his coach down.

Everyone gets growing pains at the start of their international career and Robshaw had the added burden of learning the role of captain - he was appointed captain for just his second cap - and now he has got to the position where he appears very comfortable and natural in the position.

That comes from his good all-round performances. I wouldn't say he is particularly stunning in one particular technical area, but his fitness and effort are supreme.

He hits high numbers in terms of tackles and work-rate and he is always challenging the opposition with the sheer amount of hard work he puts in on the flank.

Where do Wales go now?

England took it into the guts of Wales and found a soft belly rather than the rigid one that has been there on countless occasions when the teams have met in Cardiff.

But Wales can't move too far away from the game plan they have got, given their personnel.

Rhys Webb has come in and taken his chance at nine and Dan Biggar has been good at 10.

Jamie Roberts has been criticised but he needs to play behind a pack going forward, and he has been one of Wales' best players over the past couple of years.

Similarly, Jonathan Davies didn't get much ball to run, George North only had one decent run, there was nothing from Alex Cuthbert, and the main thing I remember from Leigh Halfpenny was him missing a relatively simple kick.

Warren Gatland set out his team to play the way they are built. They are big powerful guys, particularly in the backline, and they are not about to zip the ball down the line and do intricate 'smoke and mirrors' moves.

They are forthright and very direct, and that relies on quick ball and keeping momentum by ensuring you don't get turned over.

I've heard the suggestion that Gatland has adapted their training to focus on the World Cup at the expense of the Six Nations, but for now it won't wash as an excuse because, whatever is in the future, you don't want to lose your next match. 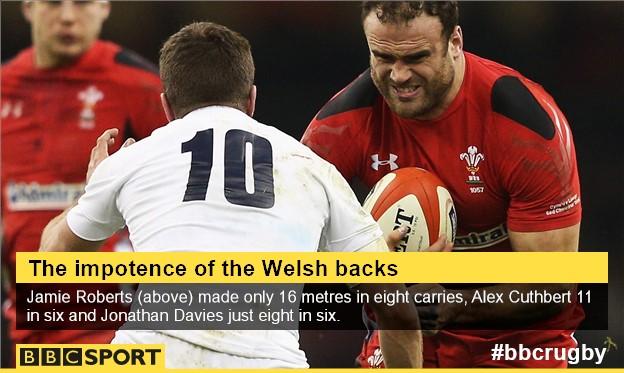 Cotter winning over his team - if not winning matches

Scotland have responded to Vern Cotter's coaching and it is amazing how teams adapt and feel that they connect with one person's coaching - how they understand what is required of them - more than another.

That is all about how quickly a coach can convince the team to buy into his way of doing things. There has to be a feeling of mutual trust between the players and the coach to effect that sort of obvious change and improvement.

Scotland have a pretty basic game - which is what most coaches strive for. They get decent quick ball through their strong line-out and then use their dangerous runners to create opportunities, and it was through that that they scored the only try in Paris.

The eventually went down 15-8 but if they had finished off more of the chances they made, it could have been a very different result. They will give Wales a run for their money in their next game.

Fly-half Finn Russell is a good person to look at in terms of how Scotland are shaping their game. He is quite error free and, if you have 15 players who make few basic mistakes, you are going to give yourselves a chance.

Ireland still not the finished product

Coach Joe Schmidt has been in place for just under two years with Ireland and, despite their victory in last year's championship and their impressive autumn results, they are still going through a process with him.

Against Italy, you saw the two sides to their game. In the first half they played for territory, kicked the penalties through Ian Keatley and kept the scoreboard ticking over.

When Italy went down to 14 men the visitors upped the tempo - Ian Madigan arrived at fly-half and they started to score tries.

There was a rumour when he was in charge of Leinster that Schmidt wanted to turn them into the best passing side in Europe, and that is an area that other teams have neglected in the modern game - there is far more of a focus on big running, tactical kicking and hard chasing.

I wouldn't be surprised if passing is an area he is working on now at international level as well.

What Ireland have - and what is a big help for Schmidt - is leaders all over the field. Even after the retirement of Brian O'Driscoll they have Paul O'Connell in the pack, Rob Kearney calling the shots from full-back, Rory Best in the front row and Munster captain Peter O'Mahony in the back row.

Ireland didn't play as well as they have done under Schmidt but you have to understand this is the opening salvo on the first weekend and teams are still feeling out their combinations.

The Irish would also have been unsettled by the loss to a hamstring problem of influential flanker Sean O'Brien, who was set to return to the Test arena after a long injury absence, in the warm-up before the game.

You get the picture

My BBC colleague Jonathan Davies thought Wales would win - so did I - and Sir Clive Woodward was very happy that he got his prediction of England to win by a small margin right. He did not let us forget that afterwards!

The one good thing for me as a pundit is that Jonathan has to change his Twitter photo now. It is currently him smiling after Wales' record win over England in 2013. I hope we can all move on from that day now.