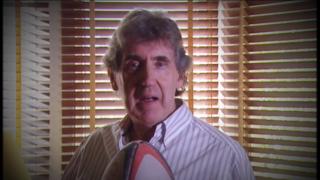 Shane Williams' try to beat Scotland in 2010 will be remembered as one of the most dramatic moments in the history of the Six Nations. So what happens when it's given the Twin Town treatment?

In the cult film, the character Bryn Cartwright, played by William Thomas, recreates Phil Bennett's try against the Scots in 1977.

And Thomas has done it again for Sport Wales. This time it's the Welsh wizard who is immortalised by 'Bryn Cartwright.'

Watch Sport Wales every Friday on BBC Two Wales, and iPlayer for seven days after transmission.