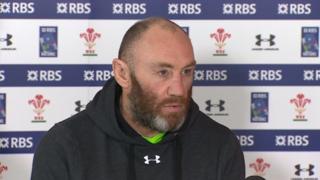 George North could play for Wales against Scotland, according to Wales forwards coach Robin McBryde.

The former Wales hooker tells a media conference that North is "symptom free", but still undertaking "return to play protocols".

North took two blows to the head in the 21-16 Six Nations defeat against England, but played until the end of the game after Wales medical staff missed the second incident.

McBryde confirms medical staff will have access to video replays of incidents to avoid a repeat.