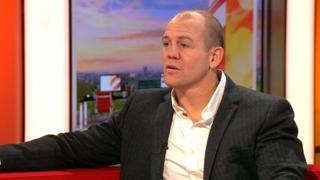 Former England captain Mike Tindall says it is "strange" Wales winger George North was not taken off for concussion during their 21-16 Six Nations defeat on Friday.

It comes as the number of reported concussions in English rugby rose by 59% in 2013-14 compared with the previous season - according to the latest annual injury audit.