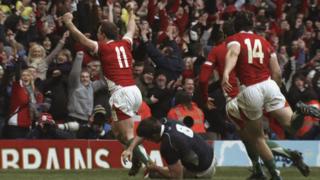 As Scotland and Wales prepare to do battle at Murrayfield in the 2015 Six Nations on Sunday, BBC Sport looks back at some epic clashes between the two sides.

Wales travel to Edinburgh, keen to kick-start their championship after a painful 21-16 defeat to England in Cardiff last week, while the Scots will be hoping to build on a spirited display despite losing 15-8 to France in Paris.