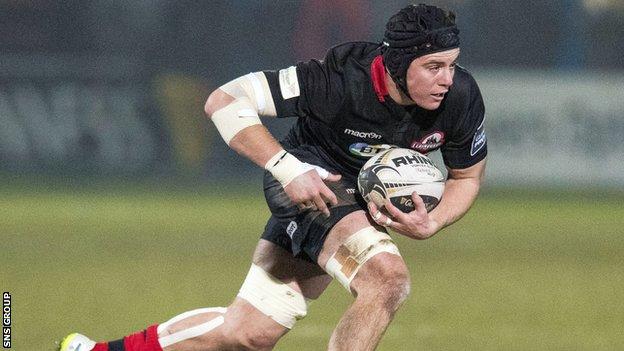 Hugh Blake is looking forward to returning to the Scotland set up after helping defeat Pro12 leaders Ospreys 24-16 in his debut for Edinburgh.

The New Zealand-born flanker was controversially called up by Scotland despite not playing for Edinburgh since arriving on trial in December.

"I think I will be in and out of the side as I will return to Scotland now," the 22-year-old told BBC Scotland.

"But it was an awesome game to play in and gives me added confidence."

Blake, who was included by Edinburgh as he was not in the match-day squad to face Six Nations visitors Wales on Sunday, insisted he did not feel any pressure to perform given the circumstances of his move from Otago.

"I try not to think anything of that," he said. "I just go out and play for the jersey."

Winger Damien Hoyland also made his first appearance for Edinburgh, having signed from Melrose this week.

Man-of-the-match Grayson Hart said: "It is huge to see those guys step up and look like they've been in there all along.

"It was a massive effort and we had to focus on playing for each other and coming together."

Scrum-half Hart was relieved that a couple of weeks without a game had not halted Edinburgh's recent momentum.

"The boys carried some really great form into that break and it's always tough to come back from those two weeks off in the Pro12 and we've got a lot of boys away with the Scotland team," he said.

"I felt we were a bit helter-skelter in the first half. We showed some good signs at stages but couldn't really put it together.

"So to go in with a lead at the break was huge for us knowing that we had a lot more to offer in the second half."

Coach Alan Solomons thought the margin of victory could have been greater.

"I thought it was a really good win out there," he said. "I am really chuffed. I thought the guys did incredibly well.

"We were going for the bonus point at the end and the consequence was we gave them the opportunity of a try, but I thought we were clear winners on the night."

Solomons also praised the players who had come into his side against the Welsh visitors at Murrayfield.

"First of all, these guys have not played together as a team - there were a lot of changes," he explained.

"Second of all, we've had no rugby for three weeks.

"I know Ospreys were missing some players, but remember this team of theirs has been playing in the LV Cup and played three or four games on the trot, so they are used to one another.

"We have a fantastic squad and a fantastic spirit in our squad and baton has been handed over to these boys during the Six Nations period and it is for them to put us in a position for the last leg of competition."