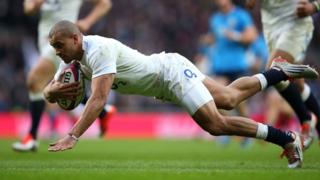 Man-of-the-match Jonathan Joseph credits England's "spirit" as they recover from conceding an early try to come back and beat Italy 47-17 at Twickenham.

Head coach Stuart Lancaster is "delighted" for the Bath player after his third try in only his second Six Nations start.

Captain Sergio Parisse says Italy have taken "a step forward from last week" and their defeat to Ireland, despite conceding six tries.