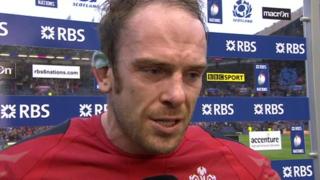 Wales lock Alun Wyn Jones says his side are not going to get carried away despite a 26-23 win against Scotland at Murrayfield.

Ospreys second row Jones was named man of the match as Wales got their Six Nations campaign back on track following defeat against England in their opening match.

Jones, 29, said although he hopes a Welsh title challenge is back on track, Wales were "unconvincing" against the Scots.

"A win's a win, but we are trying to get better," said Jones.