Brutal in Dublin, entertaining in London and thrilling in Edinburgh, the second weekend of the 2015 Six Nations had pretty much everything.

England's attack sparked into life as they ran in six tries against Italy, Ireland survived a late pummelling by France to also stay unbeaten and Wales rediscovered some form as they clung on away to Scotland.

Player of the weekend:

Ireland fly-half Johnny Sexton. I thought he was sensational. To come back after 12 weeks out and be straight back at the same level, if not a slightly higher one, was phenomenal.

Try of the week:

England centre Jonathan Joseph's first try against Italy. It was hard to pick between this score and his second one, which was a training ground move that came off perfectly.

But every now and then you like to have a bit of magic sprinkled on a rugby pitch and the way he stepped and left Italy fly-half Kelly Haimona was just magical, and after that his pace was awesome.

Memory of the weekend:

Former Scotland scrum-half and fellow BBC pundit Andy Nicol's beard. It is a tad grey with some strawberry blonde in there - I'm not sure if he is going for the elder statesman look, but I haven't worked it out at all.

Bath and England - but that's as far as it goes

A lot of people have been making the comparison between myself and England's double try-scorer Jonathan Joseph, who is now filling the Bath and England midfield role that I once occupied, but there is a big difference between us.

I would anticipate or see a space, be on course to run into it and depend on players feeding me the ball on that angle.

Joseph, by contrast, creates his own space with quick feet and rapid acceleration, and his speed and step will humble defences.

We have seen him step off his left foot twice to try-scoring effect - firstly to go past Dan Biggar and score against Wales last weekend and then, against Italy on Saturday, he went the same way to beat Haimona and create the gap to score his first.

However, you can't really prepare to play someone like Joseph.

To counter that step, you would try and line up opposite his right shoulder, but that is generally a tackler's weaker side and we don't know yet if Joseph is capable of going the other way, which he might well be.

The hesitation that he causes is his trump card and he is very hard to defend against.

There is one similarity in that we both worked well with our Bath fly-halves - Stuart Barnes for me and George Ford for him. 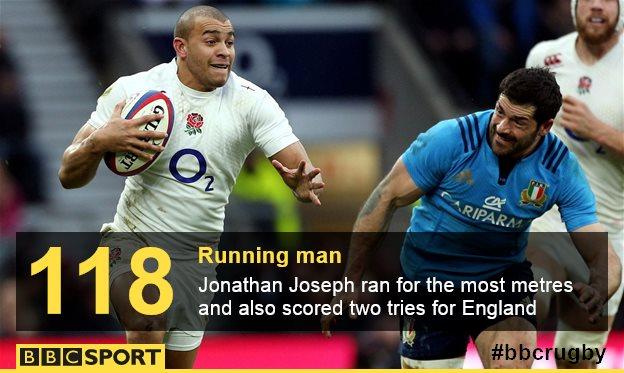 Time for a back-three rethink for Wales

Liam Williams replaced George North - who was given time off to recover from concussion - and I certainly think there is room for him in the side on a more permanent basis.

He deserves to be in that side on form at both regional and international level and, even though Dan Biggar gives you a decent place-kicking option, Leigh Halfpenny keeps on proving himself in pressure situations at that level.

I think you would go with those two and either one of George North and Alex Cuthbert. Right now, form-wise, it doesn't really matter which one of those two you go for. Neither is setting the world alight.

I got the feeling right from the start against Scotland that Wales were going to play a bit more rugby than they did last week against England.

Apart from two changes forced by injury, coach Warren Gatland stuck with the same team that lost to England. I think he felt he had to do that to answer those critics who had questioned their performance last weekend.

In the end they did a half-decent job. I wouldn't say it was conclusive, because Scotland had enough chances to win the game, but Wales showed a more clinical edge to take theirs. 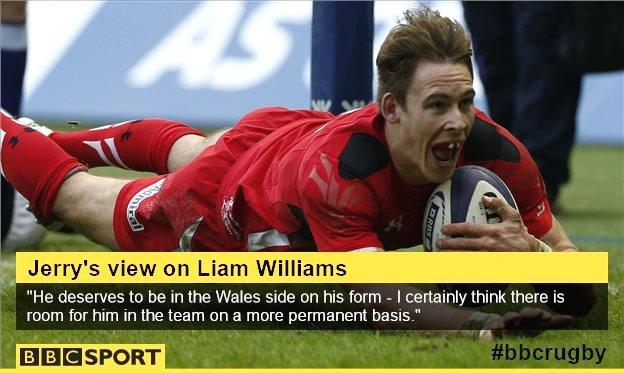 It is the same old story. On the positive side they create chances, but they just are not finishing them.

I'm not being down on Scotland. I'm just frustrated by their failure to deliver on that potential and I'm not even Scottish.

They play too much rugby in their own half. They have to learn that international rugby is more about territory rather than possession and if you run the ball and take chances in your own half, you risk being turned over or giving away kickable penalties.

At the other end of the pitch, they failed to take a host of clear chances because of a lack of a clear pattern.

They have all caught white-line fever, they are blinded by the fact they are so close to scoring rather than being calculated and knowing what they are going to do.

Last week against France they went wide and scored outside France through Dougie Fife, this week they played it narrow and the Welsh defence was waiting for them in the tight channels.

They need an organised structure to make sure they get through those crucial last five metres and over the line.

The Irish team are like German engineering - they are efficient, they are reliable and you can count on them to do a really good job.

There is nothing spectacular about their play at the moment. It is prescriptive - head coach Joe Schmidt has nailed down every bit of detail - but without being boring.

The players look incredibly fit, and they look energetic and happy in their work. Their defence is solid - they have conceded one try in their two games - and when they are backed up by kicking as good as Jonathan Sexton's and Conor Murray's, it makes a team difficult to overcome.

The England game in a fortnight is going to be like a game of chess with both sides looking for that checkmate move.

England probably have a few more X-Factor players who can win a game in a short amount of time and little space, but you have to weigh that against the collective strength of an Ireland side who have won their last nine Tests.

It is difficult to call, but, at home, Ireland are going to be tough to crack.