Fly-half Danny Cipriani has promised he will never again take England "for granted" after ending a seven-year Twickenham exile on Saturday.

Cipriani, who came on as a second-half replacement, marked his first England appearance there since 2008 with a try in the 47-17 win over Italy.

"I probably took it for granted a bit [in 2008]. I've learned lots of lessons in the last seven years," he said.

"There's no way I want to be out of this side ever again."

The 27-year-old described his return to Six Nations action as "one of the highlights" of his career, adding that he is now appreciating "every moment and every experience". 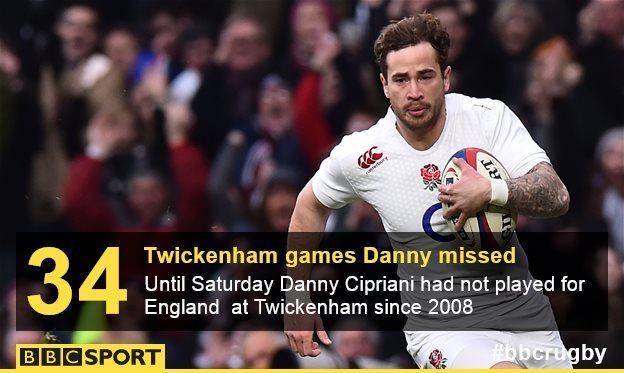 The Sale Sharks player has appeared just 10 times for England since his debut as a 20 year old in 2008.

Cipriani, who began his career at Wasps and won the Heineken Cup with them in 2007, saw his international career stall through a combination of injury, off-field issues and indifferent form.

He also joined Australian Super 15 side Melbourne Rebels in 2010, despite then-England coach Martin Johnson warning him it would jeopardise his international chances.

Cipriani, who is now working with Jonny Wilkinson's mentor Steve Black, said he felt "humbled" by his rapturous reception on Saturday, adding: "There's a lot more for me to do.

"I want to carry on being a valuable member of the squad: I have to keep learning under Andy Farrell, Mike Catt and Stuart Lancaster."