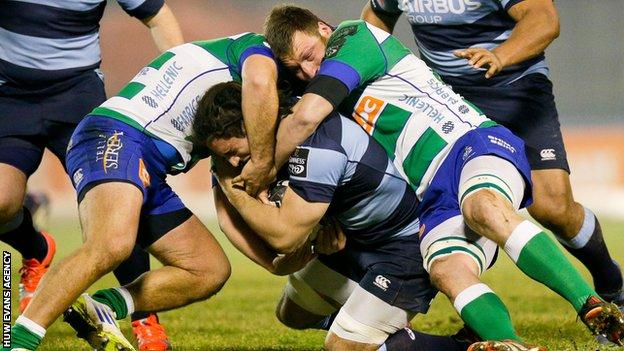 Full-back Jayden Hayward scored 20 points, including one of the home side's five tries.

It was probably Blues boss Mark Hammet's last game in charge, with his departure expected to be announced.

BBC Wales Sport understands Hammett is to leave, although the former All Blacks hooker was in charge of the team in Italy.

However, he but did not undertake the usual post-match interview for BBC Wales' Scrum V television programme.

News of Hammett's impending departure dominated the build-up to the game and the Blues were further disrupted when fly-half Gareth Anscombe withdrew with a shoulder injury.

That saw Rhys Patchell moving to stand-off with Joaquin Tuculet taking over at full-back.

The Wales international kicked nine points and made a superb break for Navidi's try, but it was a rare bright spot for the Welsh side.

If the Blues' preparations were thrown into chaos it showed in a shambolic opening as Treviso took advantage of defensive frailties to race into a 15-point lead in the opening quarter of an hour.

At the start of the game the Blues were in 9th-place and Treviso 11th, hardly surprising given the generosity of both defences which between them leaked six tries in the first half.

The home team secured their bonus point before the interval when the outstanding Hayward raced 50 metres after taking advantage of a yawning gap in the Blues' midfield.

The Blues' generous defending was not improved at half-time as substitute Siniloli raced over between the posts from the first attack of the second half.

Adam Thomas' try seven minutes later put the Blues within touching distance of a try bonus point, but there were no further tries in the final 32 minutes of the game.