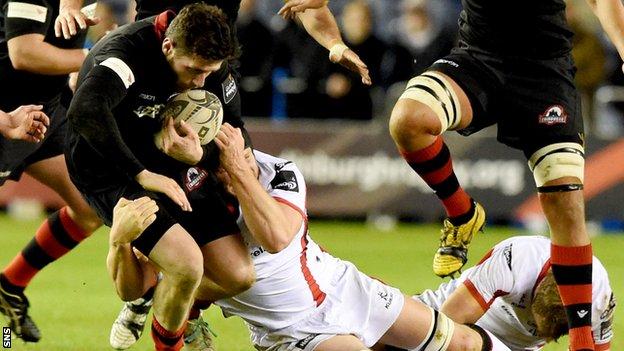 Edinburgh full-back Jack Cuthbert was left crestfallen after his side succumbed to a 20-17 defeat to Ulster.

The hosts went down at Murrayfield on Friday in a match peppered with inaccuracies and indiscipline.

Ulster lost Stuart McCloskey to a red card, and saw out the final 10 minutes minus sin-binned Franco van der Merwe.

"I'm very disappointed - we're all gutted about that one," Cuthbert told BBC Scotland after his side slipped to their first home loss in 10 games.

"We had a few opportunities to turn things around in the last couple of minutes and we didn't take them. But there were a lot of errors in that first half particularly, a lot of things to tighten up on.

"We'd have liked to have been cleaner with our kicking game - me especially, I made a few errors."

As an outside back, Cuthbert was particularly frustrated by Edinburgh's lack of potency as the game drew to a close.

Hugh Blake's fumble as the back-row stretched for the line in the closing minutes was as near to victory as they came, while stand-off Tom Heathcote missed five penalties and a conversion.

"Ulster have a pretty vicious rush defence - they try to force errors out of you - but one of our strongest points is our forwards game," Cuthbert added.

"We tried to stick to our guns, but they were pressuring the passes out wide and there were a few inaccuracies at lineouts; we made life very difficult for ourselves."

Edinburgh head coach Alan Solomons added: "Our execution wasn't accurate today, both in terms of the kicking and we talk about accuracy in terms of putting the ball into the lineout correctly.

"There were 12 easy points that we let go begging, and then at the end, key errors, a few skew throws into the lineout cost us. It's very, very frustrating - that's a game we should have won."