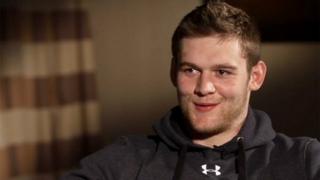 Flanker Dan Lydiate talks about Wales' Six Nations tournament so far, and the importance of bouncing back to beat Scotland after losing to England.

He also tells Scrum V's Ross Harries how he finds it difficult to understand being called a "one trick pony" when he was lauded for his playing style in 2011 and 2012 and his chop-tackling technique is still effective.