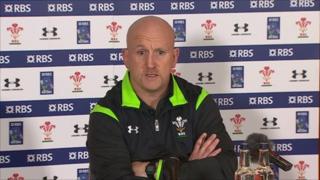 Choke tackles should be banned according to Wales coach Shaun Edwards.

The tactic is used by teams to hold up an attacking player by an arm around his neck and shoulders, in a bid to win a scrum.

Edwards says it adds nothing to the game and grills the media at a Wales press conference for their thoughts.

He asked: "Does anyone here think it adds to the game in any shape or form?"