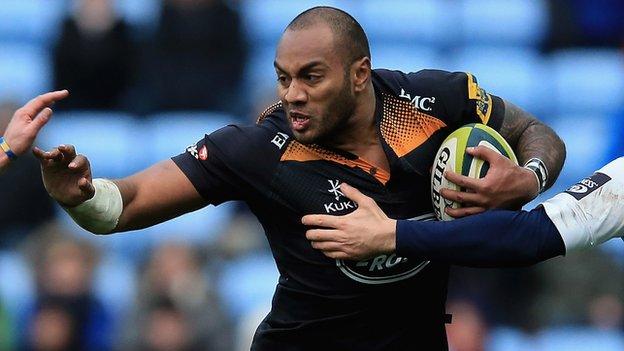 Wasps winger Sailosi Tagicakibau has signed a new, extended contract to stay with the Premiership club.

The 32-year-old New Zealand-born Samoan international is in his first season at Wasps, having signed from London Irish.

He scored four tries in his first 15 outings before being put of action for five weeks by a hamstring injury, but is now fully fit again.

"I was fortunate to get a lot of game time early on," he said. "And it's been good to see us starting to click."

Tagicakibau follows the lead of director of rugby Dai Young, who signed an extended contract in January, tying him to the club until 2018.

But the new deal for the Samoan, who originally signed on a one-season deal last summer, is of unspecified length.

"The move to the Ricoh Arena, playing in front of some big crowds, has been an exciting experience for the boys," he added.

"I'm learning from the coaching team of Dai Young, Stephen Jones and Brad Davis and I've also been impressed by the calibre of new signings the club is bringing in next season."