Northampton extended their lead at the top of the Premiership to 13 points with a hard-fought win over Harlequins.

Samu Manoa's converted try was sandwiched by two Nick Evans penalties as Saints edged a cagey first half to lead 7-6 at the break.

James Wilson capitalised on Quins' indiscipline to touch down and extend the reigning champions' lead.

Tom Wood capped a powerful driving maul to seal victory, although Marland Yarde replied with the last play of the game.

It was unspectacular, but efficient from Saints, who have now reached the 60-point mark that generally guarantees a play-off berth.

Quins, strong and resilient for much of the game, were persistent, and could have made it more uncomfortable for the champions had Charlie Walker's try three minutes before the end not been ruled out for a forward pass. 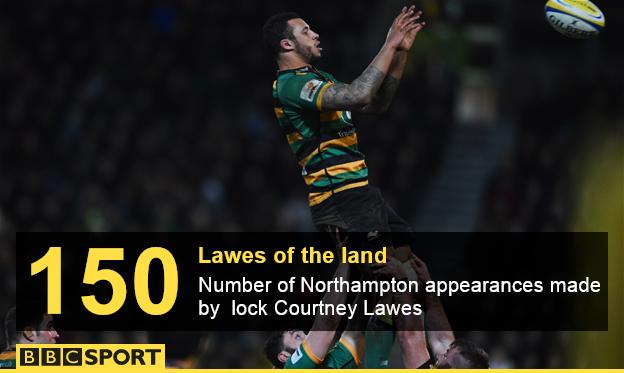 But the form book does not make great reading for Conor O'Shea's young side, with three successive defeats now registered in the Premiership.

They had Northampton in their sights at half-time, with Evans' two penalties coming either side of a Manoa try, scored from a dominant driving maul.

It was a tactic that Saints would return to throughout the night, and a catch and drive after the break had the visitors backpedalling, before the ball moved through the hands to Tom Stephenson, who released full-back Wilson on the overlap to cross.

With prop Kyle Sinckler going into the sin-bin for a dangerous tackle to the legs of Manoa, the 14 men of Quins were resolute, but finally succumbed once again to the driving maul.

This time it was replacement flanker Wood, staking a claim for a spot in England's final two Six Nations games after an injury lay-off, who benefitted, dotting down from the back of surge.

Walker's late effort was only chalked off after the interjection of the television match official, but Quins did secure a losing bonus point in stoppage time, when fellow wing Yarde broke away and crossed under the posts.

Northampton Saints director of rugby Jim Mallinder said: "Quins made it hard for us. They played well. They did a good job on our line-out, so we didn't get too much tempo or build too many phases in our game.

"Our mauls got us some good tries and we put in a very good defensive display.

"We have a good lead - you would definitely take that at the beginning of the season, but we don't get anything for being in this position.

"That will quickly be forgotten if we lose a few games and don't get a home semi-final. We didn't play brilliantly today - we can do better and we are happy to have that lead."

Harlequins director of rugby Conor O'Shea said: "We will play every game and we will see where it takes us.

"We will keep fighting until mathematically we are out of the play-offs.

"We will benefit from this period a lot more than people imagine. We will come out of it a much better side.

"We just need the little things to go our way.