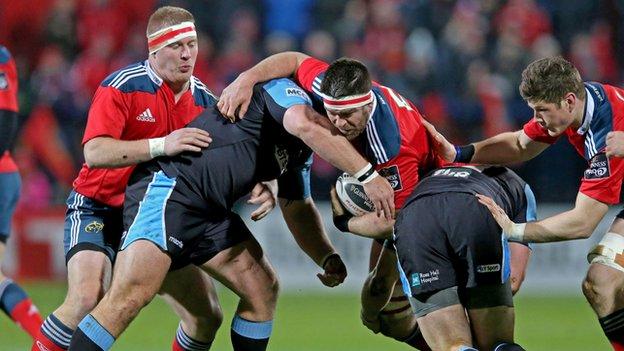 Munster moved above Glasgow to the top of the Pro12 table thanks to a bonus-point win over their understrength opponents at Musgrave Park in Cork.

Jack O'Donoghue and Eusebio Guinazu scored first-half tries for the Irish province, with Keith Earls and CJ Stander touching down in the second.

Fly-half Ian Keatley could only convert one of his side's four tries.

Rossouw De Klerk crossed the line for Glasgow after the break, Connor Braid adding a conversion and a penalty.

Anthony Foley's men stormed out of the blocks but had nothing to show for some terrific build-up play until young flanker O'Donoghue crossed in the 28th minute. Hooker Guinazu added a second before the break for a 12-0 lead.

Glasgow looked a shadow of the side that had surged to the league's summit, missing 23 players due to a combination of Scotland commitments, injuries and suspensions.

They launched a stirring second half fight-back, though, setting up prop de Klerk for a fine 59th minute try.

Munster finally opened the scoring from a clever attack near the half hour mark. JJ Hanrahan took the ball on from a quickly-taken lineout, Keatley swept out to the left where he dummied his way into the 22 and his pass back inside released O'Donoghue on a well-timed run to the line.

Keatley was unable to convert but added the extras to Guinazu's 37th-minute effort, as the Argentina international scored off a lineout maul near the left corner.

Glasgow found their rhythm on the restart, Braid landing the second of two penalty attempts and from a better return in the scrum and lineout, Ali Kellock and Josh Strauss became more prominent.

The gap was suddenly down to just two points after tighthead de Klerk took a great line onto a Braid pass. He barged past Williams and crashed over under the posts with Braid converting.

That concession seemed to refocus Munster and Earls, chasing down a pinpoint Keatley kick, delighted the home crowd by using his right instep to flick the ball up into his arms and dive over in the right corner.

Keatley was having an off-night from the kicking tee, missing the conversion and also failing to add the extras to Stander's touchdown.

Glasgow rallied in search of a losing bonus point but their luck was out when Lee Jones had a foot in touch before grounding the ball in the 75th minute.