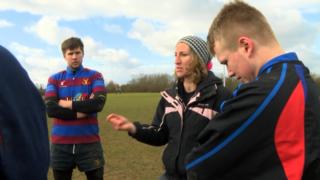 World Cup winner Maggie Alphonsi looks at the issue of sexism in rugby, as a number of women are coaching men's teams.

Katherine Merchant and Rochelle 'Rocky' Clark are Rugby World Cup winners with 156 caps between them; they are also coaches of men's rugby teams.

Despite their success as players, they still encounter sexist attitudes on a routine basis when they are coaching.

The teams have improved exponentially since the pair took over coaching duties in 2010, but this does not stop some referees and opposition coaches being baffled by the idea of women in charge.