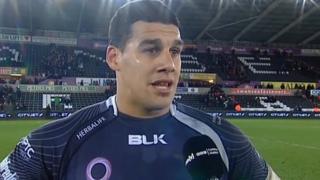 Man of the match Josh Matavesi says Ospreys should have beaten Leinster, who scored a last gasp penalty to secure a 9-9 draw in the Pro12 at the Liberty Stadium.

The hosts were 9-6 up going into the final 90 seconds, when Morgan Allen was penalised at a ruck and Jimmy Gopperth kicked a last-gasp penalty.

Ospreys remain fifth in the Pro12 table while Leinster move up to third.