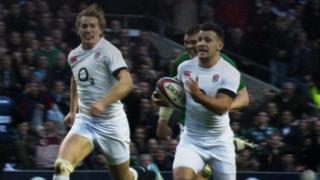 BBC Sport takes a look back at some classic moments from the epic clashes between Ireland and England in Five and Six Nations championships gone by.

Sunday's match between the two side at the Aviva Stadium is already being billed as a Grand Slam decider and promises to be another epic encounter.

With both sides winning both of their opening two matches, whose perfect record will be spoiled on Sunday?