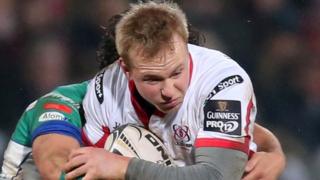 Ulster coach Neil Doak says his preparations for Sunday's match against the Newport Gwent Dragons have been hampered by two disciplinary cases.

Centre Luke Marshall and number eight Roger Wilson were cited over incidents during the recent win over the Scarlets.

Doak said he had to have a number of permutations in mind while awaiting the outcome of the disciplinary hearings.