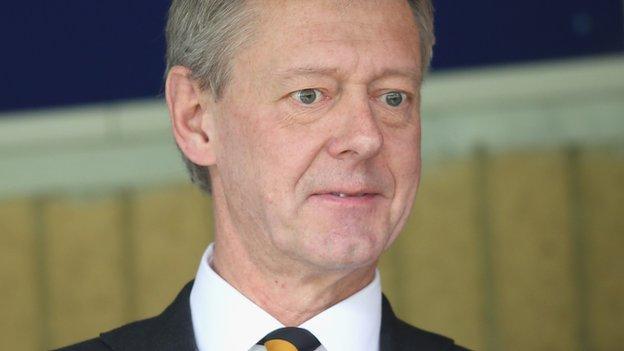 Wasps chief executive Nick Eastwood has been promoted to deputy chairman in a senior management reshuffle resulting from the instant success of the club's December move to Coventry.

Eastwood, who will continue to be primary spokesperson for the in-form Premiership club, will be replaced as chief executive by David Armstrong.

Former player Mark Rigby will take on the role of club president.

Chris Wright, who owned Wasps during the era when the then south-east based club won 11 trophies in 11 years, retains his role as honorary lifetime president.

He will "lead the long-term strategy, including the important academy and community programmes, and Wasps' successful integration into the Midlands community and business infrastructure," said a club statement.

Armstrong, who had a role in the acquisition of Coventry's Ricoh Arena in the autumn, will be in charge of all the club's commercial aspects.

The expansion of the senior management team has been triggered by the undoubted success so far of the controversial move to Coventry.

"We couldn't have wished for a more successful start to life at the Ricoh," said Richardson. "We have been overwhelmed by the support of our loyal Wasps fans and the Coventry and Warwickshire community."

Their first home gate at the Ricoh Arena, which they share with tenants Coventry City, broke the Premiership attendance record for a recognised home ground.

Just four days before Christmas, they attracted a crowd of 28,254 for the bonus-point Premiership victory over London Irish - over four times higher than their final game at their former home in Wycombe, although the number was boosted by 3,000 free tickets being given to local schoolchildren

And, fuelled by three more bonus-point Premiership wins and a 20-20 European Champions Cup draw against Leinster, they have continue to average over 20,000 - double what Coventry City have managed since returning to the Ricoh in September.

Wasps are fourth in the Premiership table, part of a five-team logjam separated by just a point behind runaway leaders Northampton, all chasing a top-four finish that would put them in the play-offs, or top- six finish that would guarantee the extra reward of European Champions Cup rugby next season.