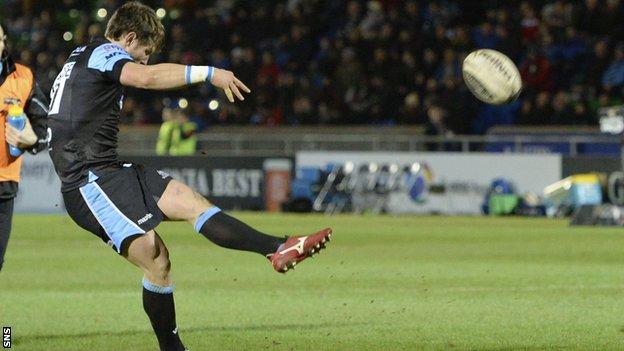 Glasgow Warriors coach Gregor Townsend refuses to take a top four place for granted despite holding the advantage following a 26-5 win over Zebre.

Warriors returned to the top of the Pro12 with DTH van der Merwe crossing twice in the first half and Chris Fusaro and Kevin Bryce also going over.

"We've got to play three of the teams in the top four," Townsend told BBC Scotland.

"We've got Leinster away, Ospreys away, Ulster at home."

Glasgow also have face another in-form Irish side.

"We've got Connacht away, which will be a very tough game, so we know we'll have to play really well just to stay there," said Townsend.

Zebre had Alberto Chillo, Matteo Pratichetti and Mauro Bergamasco sin-binned in the first half, but Glasgow replacements Glenn Bryce and Will Bordill were yellow-carded in a rain-soaked second period.

"When the weather came down, especially in the second half, there wasn't much rugby," said Townsend.

"If you were a scrum connoisseur, you would have loved the last 10 minutes of the game, but it was job done.

"We played quite well in the first half, clinical at times, obviously drew penalties and we got the tries that we were looking for tonight.

"We'll be concerned that we conceded a try. It was a goal in the second half to ensure we don't concede a try.

"There was a succession of penalties, one of them I totally disagreed with - Lee Jones winning the ball in the ruck area - but after that, it was our own ill discipline, so we can't afford to come offside, to throw a punch, and that puts us under more pressure when we've men in the sin bin.

"We have to be better, we have to rise above it. The game, when the weather is poor, it does get confined to the forward exchanges and obviously we weren't disciplined enough in that area in the second half.

"I believe the squad we have now is stronger. We've got a tough run-in, tougher than we had last year.

"But we're set in a good position, we're sitting top of the league just now and we'll be either first or second when we play our next game against Leinster."