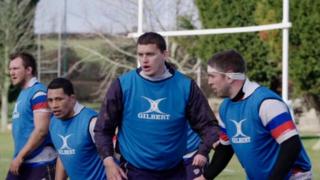 Scrum V looks at the Welsh influence that is driving Bristol RFC forward in English rugby.

With former Ospreys boss Sean Holley at the helm, Bristol have strengthened their playing ranks from Welsh playing stock.

The likes of British and Irish Lions Ryan Jones, Ian Evans, Dwayne Peel and Gavin Henson have added experience to the club's Championship campaign as they bid for promotion to the Premiership.