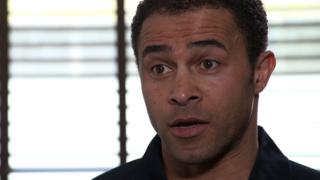 Lots of pressure on Burgess - Robinson

England World Cup winner Jason Robinson says there is "a lot of pressure" on Sam Burgess after changing codes to play rugby union.

Burgess is described as "one of the best there was" in league but the former winger warns that union is a "completely different game", but thinks Burgess is at the "right club in Bath".

Robinson made the switch from league to union in 2000 and scored the only try in the final as England won the World Cup three years later.