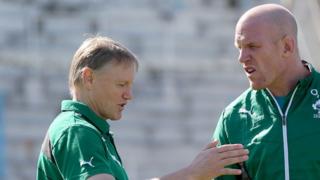 Ireland coach Joe Schmidt says Paul O'Connell's "big match intensity is almost contagious" within the squad as the lock is set to win his 100th cap for his country.

"He's incredibly well prepared. He's intelligent and thinks about the game but then delivers physically in the moments when we are under pressure," Schmidt told BBC Sport Northern Ireland ahead of Saturday's vital Six Nations game against Wales.

Video is UK only