Ten years ago when Wales were beating Ireland on their way to a historic Grand Slam, it was all about the tries.

Welsh fans had witnessed romps in Rome and Edinburgh, during which the ball was thrown around with gleeful abandon.

Winning was as important as it's always been. But there was as much style as there was substance.

That year, 71 tries were scored in the six nations, 17 by Wales. This year, so far 27 have been scored, four by Wales.

Ireland - this weekend's opponents and the tournament leaders - have scored three. Only France have scored fewer. It's part of an ongoing downward curve.

The game has become about precision at the expense of expression. Tight margins over wide open spaces.

And nobody does precision better than the Irish. Joe Schmidt has turned the pitch into a laboratory; the arena in which his scientific theories are put into practice. 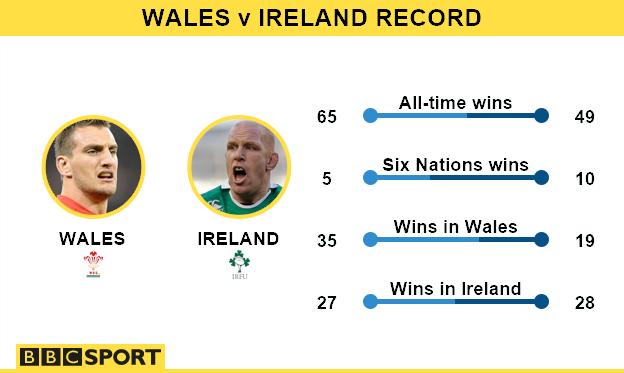 And his subjects are executing his game plans with dispassionate ease.

It hasn't always been thus. Beating Ireland in the past was more often about containing a combustible ball of fury.

Now it's more about finding a chink in the relentless, robotic machine that has engineered a record-breaking 10 wins in a row.

It's not pretty, it's not particularly captivating. But it's very effective.

At the heart of it is their imperious half-back pairing of Conor Murray and Jonny Sexton, referred to recently by Warren Gatland as the world's best.

Their pinpoint kicking is repeatedly forcing teams into mistakes, into giving away field position, or squandering possession.

And in Tommy Bowe, Rob Kearney, and Robbie Henshaw, they have a number of former Gaelic footballers who are adept at plucking those balls from the sky.

Thanks to those instinctive skills, Ireland have the best success rate in the tournament when it comes to reclaiming their own kicks.

Gatland says he's determined not to get sucked into a kicking game, as Wales did last year in Dublin, and in Cardiff against England this year.

But if Ireland continue with their aerial bombardment, Wales can take comfort in the fact they have their own arsenal of "bomb defusers".

Dan Biggar, Liam Williams, Leigh Halfpenny and George North are the match of their Irish adversaries in the air. If they continue in that vein, Ireland may be forced to change tack.

So where else might they look for an advantage? Their line-out is a traditional strength and with Paul O'Connell winning his 100th cap on the weekend, it may be better still.

But Wales posted a 100% return in their lineout in France, and it looked better oiled than it had been in some years.

And they're unlikely to get much change out of a scrum anchored by the seemingly immovable Samson Lee.

The breakdown? Sam Warburton, Gethin Jenkins, Peter O'Mahony and Sean O'Brien are among the finest jacklers in the world game. It will be an intriguing battleground.

The sides seem extremely well matched in most areas, so perhaps this will come down to something other than the battles on the pitch.

It's one of rugby's strangest historical quirks that Wales have only beaten Ireland twice in Cardiff in the last 30 years. 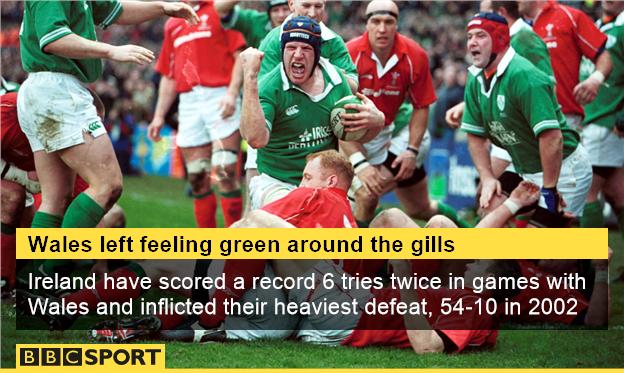 Home advantage seems to count for nothing in this fixture. And Ireland are the only side in the Six Nations that Warren Gatland has lost to more times than he has beaten.

History it would seem, is against Wales.

But this fixture never follows a pre-ordained script. It's a fixture in which you never take your eye off the ball - literally in 2011 as a wrong ball allowed Mike Phillips to claim a controversial victory for Wales.

It's a fixture in which Grand Slams have been won and lost. In which tempers have flared, fists have flown, and pulses have raced.

And despite the relatively muted build up to this one - with a notable absence of sensationalist headlines - you can be sure of more of the same come Saturday afternoon.

Join our Six Nations Rewind of the 2005 Grand Slam decider in video and words from 09:10 GMT on Saturday, 14 March at bbc.co.uk/scrumv. Email us at scrumv@bbc.co.uk with your thoughts and memories, or tweet us using #ScrumV .