Welsh Rugby Union (WRU) chairman Gareth Davies has said he has no interest in succeeding Roger Lewis as the governing body's chief executive.

Lewis will stand down in October and the union has announced details of the formal process to appoint a successor.

"I think it's probably come too late for me," the 59-year-old said.

"A number of people have mentioned that over the last couple of weeks but that's certainly not in my plans at all.

"I'm delighted to become chairman of the WRU. It's a great honour and probably the next best thing to playing or coaching. I'm happy with that."

Davies was elected chairman of the WRU in October 2014 and replaced David Pickering.

In his role as Dragons chief, Davies was on the opposing side to WRU chief executive Lewis during a protracted row over the future of Welsh rugby. 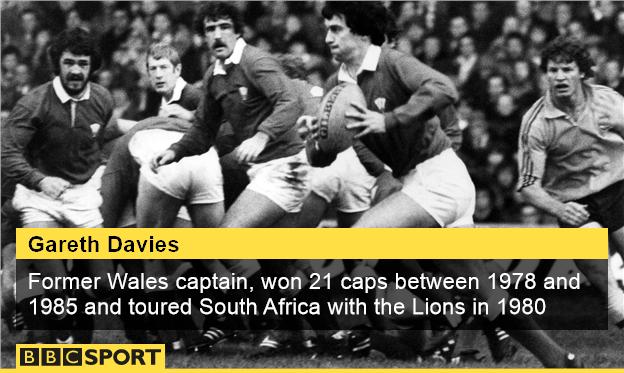 The disagreement over the running of the game in Wales came to an end with the signing of a ÂŁ60m deal in August 2014.

Lewis, 60, announced in February he would be leaving the role he has held since 2006 following the World Cup in the autumn.

The union have outlined their plans to find a replacement with a tender process agreed to appoint search consultants who will be asked to identify a shortlist of candidates.

"We've got to be clear, moving on from Roger Lewis's reign, that we have the best person for the job to take Welsh rugby forward," Davies told Scrum V Radio.

"We've got a sub group within the union's remuneration and appointments committee and we've met to discuss to what sort of individual we're looking for and how do we go about it.

"That's why we've decided to look at a professional search consultant and to make sure we don't leave any stone unturned in terms of who's out there.

"We need to be very transparent in this and we're going out and looking for the right person."