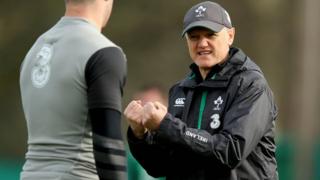 Ireland coach Joe Schmidt says his team found the Welsh defence hard to break down in their 23-16 Six Nations defeat at the Millennium Stadium.

The result ended Irish hopes of a Grand Slam, but Schmidt's side can still win the championship, along with England and Wales.

"We didn't get into the game at the start and when we did get back into it, we had to fight for every inch," said Schmidt.

"We couldn't convert our field position into points and the Welsh defensive effort was superb. They were very combative in the collision area."