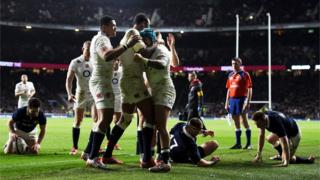 England will top the Six Nations table going into the final weekend after finally putting a dogged Scotland away to retain the Calcutta Cup.

The Scots led by three points at half-time and remained in touch until the final five minutes with England failing to convert a number of golden try-scoring opportunities.

Jack Nowell sealed the victory with a late try, leaving Stuart Lancaster's men in the hunt for their first title in four years.