A largely superb weekend of rugby sets up a cliff-hanger of a conclusion to this season's Six Nations.

After Wales had brought Ireland's 10-Test winning streak to an end in a brutal meeting in Cardiff, an enterprising England team finally got the job done against Scotland at Twickenham.

France's win over Italy in Rome was far less entertaining, but it leaves four teams with at least a mathematical chance of lifting the trophy. 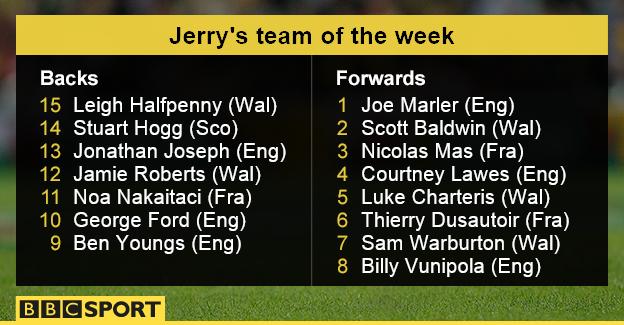 Moment of the weekend: Just before we went to air on BBC One in Rome this weekend, the weather was so wet that presenter John Inverdale had to ask for a hairdryer to restore his locks to their television best. I think the rest of us enjoyed that.

Try of the weekend: France have not scored many tries this year, but Yoann Maestri's score was superb. Scott Spedding's break from deep was brilliant, the support from the French forwards came thick and fast and it was a great line and pass from Yoann Huget to put the second row in at the corner.

Player of the weekend: Lock Luke Charteris, whose 31 tackles in an outstanding defensive display by Wales set a Six Nations record.

Wales as a team made a Six Nations record 250 tackles (beating the 208 mark set by Italy last year).

With England, Ireland and Wales level coming into the final weekend, points difference is going to prove crucial.

If Stuart Lancaster's side had finished just some of the raft of clear opportunities they created against Scotland, they would be comfortably ahead on that score.

As it is, they squandered most of those chances and are only four points better off than Ireland.

It was disappointing that Jack Nowell, Luther Burrell and Tom Youngs all made clean breaks and then failed to give a scoring pass.

You have to be smart in that situation. Unless you are much faster than the opposition - like Gloucester's Johnny May or South Africa wing Bryan Habana - or have got the size of All Black wing Julian Savea, then you have to think about buying time to find support, like Spedding did for Maestri's try against Italy.

The England boys didn't look like rugby players in those situations. But I am not going to be too critical - I remember doing exactly the same against France at the Parc des Princes in the early 1990s.

I made a break and got tackled, and afterwards wing Rory Underwood told me he was right on my shoulder waiting for a pass. I just didn't believe him, but when I watched the match back afterwards, I saw him there, perfectly placed just as he said.

I don't think I did it again!

It is difficult to weigh up all the options in a couple of seconds, but it is partly experience. If you are a good player you may mess it up once, but you won't do it twice.

One player who is looking completely at home in international rugby is George Ford.

He has only made six Test starts, but I think he is out on his own in terms of recent England fly-halves.

When Danny Cipriani made his England debut as a 20-year-old against Wales back in 2008, he had aspirations to be that sort of player.

With his pace Cipriani probably had even more of an attacking game, but Ford is showing genuine stewardship. He is a proper controller of the game.

I just loved the spectacle and passion of Wales v Ireland. It was more than intense, it was ferocious - there was no doubt this was two sides putting their bodies on the line for their team-mates and nation.

It was bone-crunching. It was earth-shattering. And when the final whistle went I half-expected every player to collapse to the floor and have to be revived by physios and medical teams!

There was a period just after half-time when Ireland were battering the Wales line and you just expected Warren Gatland's side to crumble at any point.

I know from my days that it gets harder and harder as the phases go on to keep getting up, keep getting back in position and keep making the tackles.

But Wales just seemed to get stronger and stronger.

That roar from the Millennium Stadium when their side finally won a penalty to relieve that pressure and reward their efforts will have sent emotions sizzling through every Welsh player's body.

When you have been under siege and you survive like that, the feeling is like scoring a try.

It was little surprise that when the statisticians reviewed the game they discovered Wales had set a new Six Nations record with 250 tackles, with 6ft 9in lock Luke Charteris setting a new individual mark for the tournament with 31 tackles.

Ireland just seemed to believe that if they kept going through the phases, running the ball hard, Wales would eventually crack. Only they didn't.

People may say that they lacked a player with the magic to unlock Wales, but the hosts made it very difficult regardless of who Ireland had in their ranks.

Gatland's side did what New Zealand and Ireland themselves have done in the past.

They chose which breakdowns to attack - either fanning out in a packed defensive line or attacking rucks to slow up the ball and give themselves time to reorganise.

Ireland just couldn't produce enough quick ball to scramble that Welsh defence and give their broken-field runners space to work in.

Scotland staring down the barrel

For Scotland this championship has been a tale of what might have been.

They could have - perhaps should have - won their first three games and they went into the break with a three-point lead at Twickenham and the chance to prey on an England side that had wasted so many chances.

I don't know what was said in the dressing room, but they didn't turn up in the second half.

It is not as if England took the game by the scruff of the neck, it was more like Scotland sat back and let them do so.

Scotland are psychologically in a low place and, with the way that Ireland squeeze the life out of teams, they could capitulate next week in their final match.

The Scotland team that famously beat my England team to win the Grand Slam in 1990 was full of quality players like David Sole, John Jeffrey and Finlay Calder.

They had sent nine players on the British and Irish Lions tour the year before that and four of them started the decisive third Test against Australia.

This current Scotland squad would struggle to get a player on a Lions tour, never mind in a Lions team.

I don't know why that production line of talent has dried up but they need to front up against Ireland next weekend, just like Wales did this weekend.

They have to deliver a performance that shows they have belief in Vern Cotter as coach and each other as players.

The way it is set up next weekend is just great for the viewer watching at home.

Wales will go out against Italy and try to set a target for Ireland, who will then go out and try to beat Scotland by enough to surpass that mark and set the benchmark for England at home to France in the day's final match.

We have already had so many close games in this championship and I'm sure we won't know what the eventual outcome is until the final whistle blows at about 18:30 GMT at Twickenham.

During my career I was fortunate to play in matches with a lot riding on them - be a series win or a title. Those days were the reason I played rugby.

You want that challenge and to prove to people you can win trophies and titles. That's what you play for.