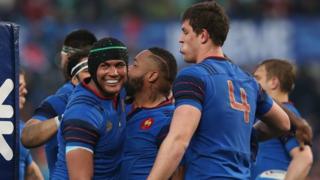 France's second win of the 2015 Six Nations keeps their remote title hopes alive as they dealt with difficult conditions to beat Italy 29-0 in Rome.

France led 9-0 at the interval thanks to penalties from Camille Lopez and Scott Spedding, but both teams missed shots at goal in an uneventful first half.

The French crossed the line twice in the second half with an inspired Spedding break leading to a try for second row Yoann Maestri and replacement centre Mathieu Bastareaud bundled his way over late on to score.

France face England at Twickenham in their last match of the Six Nations while Italy face Wales in Rome in Saturday's final round of matches.