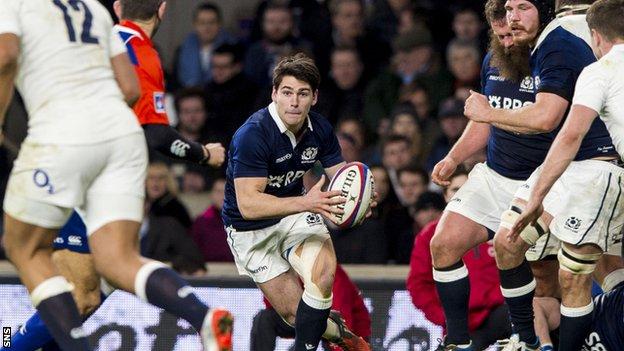 Again, there were plenty of talking points after Scotland's defeat by England on Saturday; technically, tactically and psychologically.

Some positives, some negatives and a few questions too, I'd imagine. I'll touch on a couple of them.

The kicking game, or "exit strategy", has become one of the key components of professional rugby in the last two years and, the higher the level, the greater the importance.

Most teams will have a marker on the pitch where their exit strategy extends to - often the half-way line - and they will use a number of different set plays to get a chase line on their feet, blockers in place and the right player executing the correct kick.

Scotland lost the territory battle on Saturday, resulting in plenty of "exits" forced upon them.

There were examples of blockers not being in place, such as when Courtney Lawes caught Finn Russell behind his try line, or in the second half when Hogg was in at first receiver and the blockers were protecting the scrum-half's foot rather than Hogg. The result is that George Ford has a clear run and charge-down attempt. The difference is a 15 metre gain compared with a 40 metre gain.

Other components broke down too, resulting in front-foot counter-attack ball, but what I want to make you aware of is that the kicking game is a team set-piece and everyone has a role to play.

A great kick can fix an average chase and, likewise, a great chase can fix an average kick, but if you don't have your blockers, you're playing with one hand tied behind your back. Unfortunately, too often two out of the three components didn't function, giving field position and momentum to England.

In fairness to England, they escorted the Scottish chase line very well, making it hard to get near their catcher - another example of little things having a big knock-on effect.

In terms of the Scotland attack, I think it needs to be a bit more connected. It's mainly a backs thing, but forwards will pop up in the wider channels too.

If the ball is in the air too long from a wide pass then defences can spot the catcher, come out of line and hit man and ball. This happened when a clear overlap was created at the end of the first half down the left-hand side.

With the set-piece back attacks from mauls, I also feel that Hogg at 15 can be ignored by a defending 13 because he's too wide and, if the wide pass was given, the ball is in the air so long that a defensive winger can react and spot the tackle. The more players in a defensive number 13's peripheral vision, the harder it is to defend, too.

Scotland's defence was broken too many times and the majority of breaks came from individuals defending and trying to problem-solve by themselves. Trust the system and work hard. It was too easy for the English at times.

Of course there were positives too from Saturday, not least that Scotland were 13-10 up at half time. The maul defence was a big step-up from the Italian game and, at times, the Scottish attacking shape really tested the English.

As the first half wore on, belief started to surface and there was some cracking interplay in the lead-up to Mark Bennett's try. If you can get quick first-phase ball, the game is so much easier as defensive lines just can't reorganise in time and this knocks on to the second phase and third phase.

Italy was a step back while Saturday produced similar emotions to the defeats inflicted by Wales and France; keep the good stuff and build on it, analyse the poor stuff and don't do it again. If only rugby were that easy.