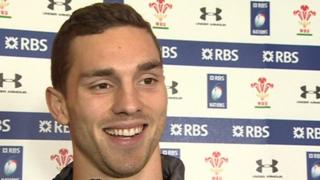 North looks ahead to Italy clash

George North says all the Wales players woke up on Sunday morning a little bit slower following their defensive heroics in the win against Ireland.

Wales are now involved in a four-way race for the Six Nations title with England, Ireland and France with one match to play.

They are also in action first on Saturday, 21 March against Italy in Rome and will need to score heavily and hope results go their way to win the tournament.

North starts by reflecting on the 23-16 win over Ireland with BBC Wales Sport's Dafydd Pritchard.