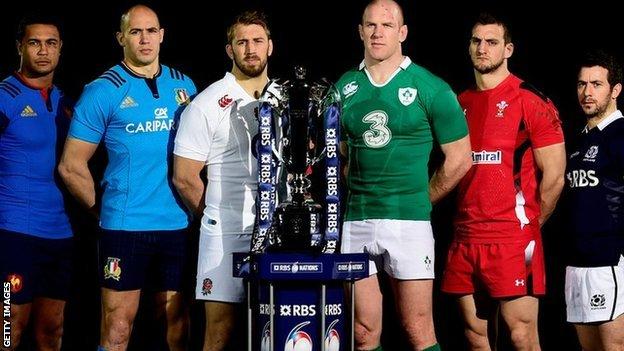 Wales would have to wait until Sunday to be presented with the Six Nations trophy if they win the 2015 title on Saturday.

England, Ireland and France can also win the tournament.

The trophy will be at Twickenham and a replica at Murrayfield, a decision based on the contenders' "points difference", said a spokesperson.

France could still steal the title if Wales and Ireland lose and Les Bleus then beat England by a margin of eight points or more.

England, Ireland and Wales are locked on six points with three wins apiece, and England's points difference of 37 puts them top, ahead of Ireland's 33 and Wales' 12.

France are fourth with four points and a points difference of 22.

"We have had to make a decision as to where we send the two trophies," a Six Nations spokesperson said.

"What we have done is base that decision on points difference.

"So we are going to send the trophy to Twickenham, and the replica will go to Murrayfield."

England would be presented with the trophy immediately if they win the title.

If Ireland claim the spoils, they would celebrate in an already-emptied stadium.

Wales' players would receive winners medals in Rome in the evening and the trophy would reach them on returning to Cardiff on Sunday.

"If Wales win the title, then medals will be presented to the team at the post-match dinner in Rome," the spokesperson added.

"And we will then organise a trophy presentation for the next day in Wales, when the team gets back home."

It is mathematically possible for three teams to end up with equal points and level on points difference.

If two or more teams finish level, try-count would determine the title-winners. But if try counts are equal, the honours would be shared.