Forwards coach Robin McBryde said Wales would be "open to a call" from the tight-head after an injury to Samson Lee.

But BBC pundit Davies urged "common sense" for both parties to speak.

"It would be silly not to use him through poor communication when it's a big World Cup year," said Davies.

"This could be Adam's last roll of the dice if needed. It's just common sense really.

"If you've got injuries and Adam Jones will come out of retirement, why not have the conversation?"

Wales announce the team to face Italy on Saturday at 11:00 GMT on Tuesday March 17.

Scarlets' Lee is out of the match in Rome after injuring his Achilles tendon in the 23-16 win over Ireland.

Jones, 34, called time on his Test career after he was overlooked for Warren Gatland's initial Six Nations squad, but he still plays club rugby for Cardiff Blues.

Davies believes Wales cannot afford to overlook 2009 and 2013 British and Irish Lions prop Jones, who has made 95 appearances for his country.

"If you've got injuries in that department [front row] why not bring Adam in, if he's fit and well and going to be able to help the cause?" he said.

"It's just one of those things where you've just got to use everyone whose available.

"We haven't got the strength in depth in a lot of positions." 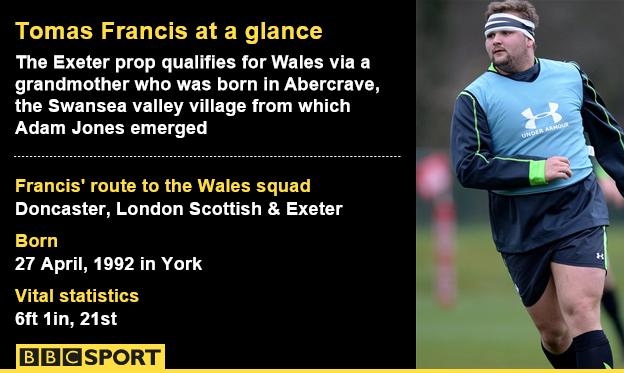 Exeter's Tomas Francis and Saracens' Rhys Gill have been added are added as prop cover.

Loose-head Gill returns to the squad amid concerns over prop Gethin Jenkins, who has a hamstring injury.

Davies has no concerns about the pair being thrown into the squad to take on the Italians.

"Gill has been in the squad before and then he was left out," said Davies.

"Exeter are going well, they look pretty strong so it would be good to see those two again to see how they are developing in the Aviva Premiership.

"It's a strong competition so you've got to be up to standard to play in that tournament."