Wales coach Warren Gatland says he will not go "on bended knees" to Adam Jones to ask the Cardiff Blues prop to come out of retirement.

Gatland said Jones, 34, might now be in the Wales squad if he had not retired.

Wales have been hit by front-row injuries, prompting speculation that Jones could reconsider his decision to call time on his Wales career.

"I was surprised at the timing of his announcement," said Gatland, who is preparing his team for Saturday's final Six Nations outing against Italy in Rome.

"He was not out of our thoughts. We had played a little bit of phone tag, leaving messages and going backwards and forwards.

"If he has changed his mind and wants to get on the phone and say 'I made a rash decision, retired too early and want to be part of the World Cup squad', that is a different conversation.

"At the moment, I will not be going on bended knees ringing him saying 'please come back we really desperately need you'.

"If Adam Jones wasn't retired from international rugby, then he may very well be in the squad now."

Samson Lee, Aaron Jarvis and Scott Andrews were preferred to Jones for the tournament.

But Lee may not make the 2015 World Cup in the autumn after suffering an Achilles tendon injury in Wales' win over Ireland last weekend.

Jones's former Ospreys understudy Jarvis starts against Italy in Rome on Saturday with Blues' second-string prop Andrews on the bench.

Uncapped Exeter tight-head Tomas Francis has also been added to the squad this week. 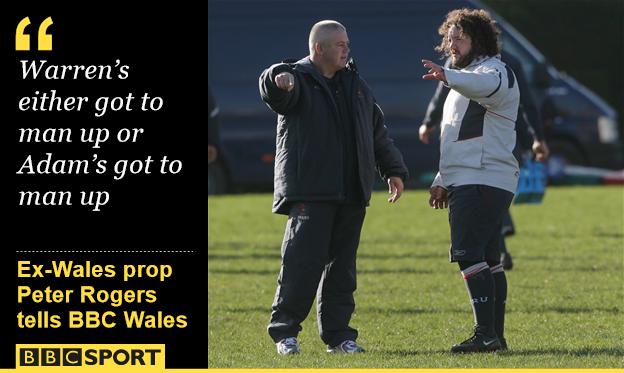 Wales have an outside chance of taking the Six Nations title this weekend, although the outcome will depend on how England, Ireland and France perform.

Wales have an inferior points difference to the Irish and England with all three teams having won three matches.

Italy v Wales kicks off at 12:30 GMT, and is followed by Scotland v Ireland, with England hosting France in the final game on Saturday evening