England head coach Stuart Lancaster has brought in lock Geoff Parling for Dave Attwood for their Six Nations finale against France at Twickenham.

British and Irish Lion Parling is the only change to the side which beat Scotland 25-13 in their last outing.

Attwood is dropped from the squad altogether with Nick Easter taking his place among the replacements.

England go into the final round of matches top of the table but level on points with Ireland and Wales. 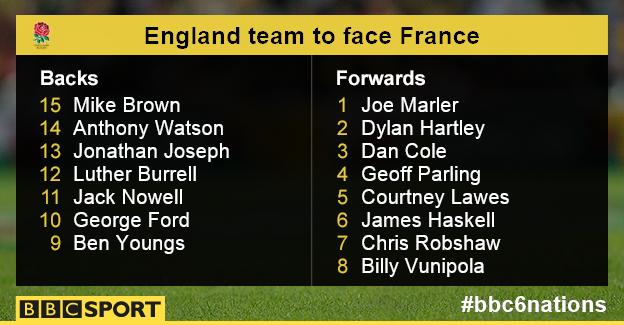 If Wales beat Italy in Rome and Ireland beat Scotland at Murrayfield, England - who play last on Saturday - will know the margin of victory required against France to lift a first title in four years.

"It's a great achievement for Dan, especially coming back from his injury last year," said Lancaster. "He is one of the cornerstones of our squad and we all wish him all the best.

"Geoff did well off the bench against Scotland and now that he has got some games under his belt we feel it is the right time to start him and use his experience and quality in the starting line-up."

France have made two changes from the side which beat Italy 29-0 in Rome on Sunday, both enforced through injury.