France edged out England to put themselves in pole position to claim the Women's Six Nations title.

Ireland can still win the championship on Sunday, but need to overcome Scotland by at least a 26-point margin.

A Gaelle Mignot try in the first half and one in the second from Jessy Tremouliere were enough for France.

Hannah Gallagher and Harriet Millar-Mills touched down for England, but they will finish the tournament fourth, with two wins.

A victory for England, who were led out by prop Rochelle Clark on her 100th Test appearance, would have drawn them level on points with France and Ireland at the top of the table, but instead the French sit two points clear at the summit.

Ireland will be confident of racking up the points they require at winless Scotland, who have conceded 154 points in their four games.

But France, for the time being, are in the driving seat after a win inspired by the 16-point haul of Tremouliere.

The full-back proved to be the difference between the sides, adding a conversion and three penalties to her smart second-half try. 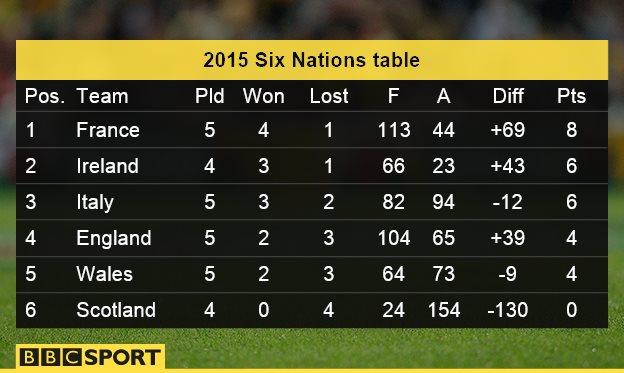