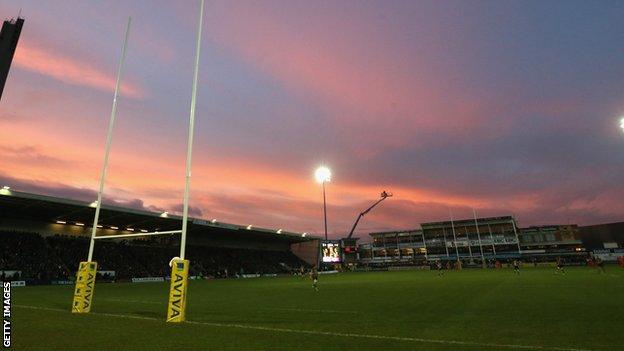 A former Northampton Saints video analyst has been banned from all sport for two years after testing positive for cocaine.

Phil Robinson made an impromptu five-minute appearance in a Saints 'A' game, after which he failed a drug test.

Robinson, who only played occasionally for Northampton's second team, had been asked to help make up the numbers for the game at Gloucester on 8 September.

He has since been dismissed from his job at the Premiership club.

After the test, he admitted to having used cocaine two days before.

Scrum-half Robinson, who will be banned until 26 September 2016, will no longer be able to represent his amateur club Derby.

UK Anti-Doping's director of legal Graham Arthur said: "Robinson is not only a rugby player but was an analyst working for a Premiership club.

"His actions have not only impacted on his playing career but on his professional working career as well.

"I hope that a case such as this one will act as a deterrent to others and demonstrate that there is no place for athletes who go against the culture of clean and fair sport."

In a statement, Northampton added: "Phil's suspension came in very unfortunate circumstances. Although he had played for our second team on a handful of occasions as a stand-in, he was not a professional player and had not been named in the squad for the game.

"Phil was only requested to come onto the bench as injury cover while on the way to Kingsholm to film the match in his position as analyst. Until then, there had been no intention for him to even be involved in the match.

"However, the terms of his suspension and the RFU regulations are clear, and as a result Phil is no longer with the club in any capacity."