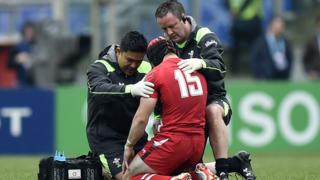 The Toulon player was taken off the pitch immediately, six minutes before half-time, and appeared to be concussed.

Halfpenny had kicked two penalties for Wales in their final match of the Six Nations at Rome's Stadio Olimpico. Wales won 20-61, keeping their title hopes alive.