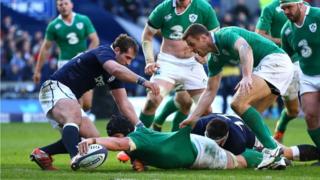 Ireland retain their Six Nations championship after a 40-10 victory over Scotland at Murrayfield clinches the title on points difference.

Captain Paul O'Connell set the tone for the match with a try in the first five minutes. Two tries for flanker Sean O'Brien and one for Jared Payne followed as Scotland replied with a score for Finn Russell.

Ireland needed a huge win and their demolition of Scotland was enough to both pass Wales and set a target just beyond England.