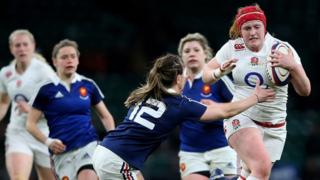 France edged out England 21-15 at Twickenham to put themselves in pole position to claim the Women's Six Nations title.

Ireland can still win the championship on Sunday, but need to overcome Scotland by at least a 26-point margin.

A Gaelle Mignot try in the first half and one in the second from Jessy Tremouliere were enough for France. Hannah Gallagher and Harriet Millar-Mills touched down for England, but they will finish the tournament with two wins.